Firstly I would like to thank Dr Paula Singleton of Leeds Beckett University, whom you can contact on twitter here. Paula very kindly shared her resources and ideas with me, and you can read about some of her Activism Barbie workshops on her blog.

I would also like to thank Dr Kay Standing, Reader in Sociology, for allowing me free rein on many of the sessions on her Body Politics module at Liverpool John Moores University.

And I must thank Dr Sara Parker, Reader in Development Studies, for taking these photographs during the workshop today.

Last but not least, I would like to thank all of the Level 6 students who have engaged so keenly throughout the module, and for taking part so enthusiastically in this workshop.

I am very keen on creative research methods, and used both reading aloud and writing poetry in my own Ph.D research. Follow Creative Methods on twitter to connect with researchers committed to using creative methods.

Although Dr Singleton’s workshops usually last at least 2 hours, in my class we only had 45 minutes left after the lecture. Likewise, although participants usually get a doll each we only had 10 dolls, so the students worked in groups. I thought it worked well as a group activity, as the conversation flowed as the groups debated on who/what to create and the reasoning behind each doll.

The session started with my Beauty Myth lecture which drew from Naomi Wolf’s seminal text. We spoke about beauty as a currency and beauty as an industry which requires compliant docile bodies in order to maintain a patriarchal system. We spoke about selfie culture, and the power to transgress and subvert beauty norms and ideals; about women becoming active subjects of their own representation, instead of mere objects of the male gaze. We spoke about the pain and mutilation of beauty, and indeed my own past experience of breast implants and explant. We spoke about rape culture and male entitlement to the female body. We spoke about the gendered nature of the beauty myth, about how the unattainable standards of the constant body project serve to make women unhappy.

The students were then given one doll per group, and a choice of craft materials. They were told to change their doll in any way they wished to, but that the main point of the exercise what the intent behind it: what message did their doll have? 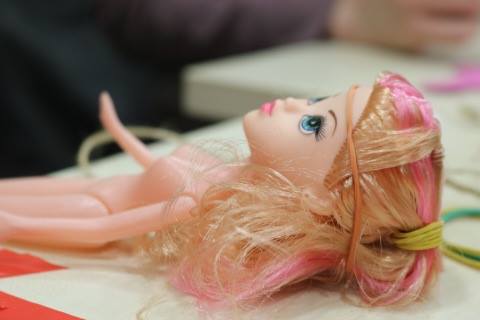 As the creations were taking shape, it was great to go around the groups to discuss what they were doing and the ideas behind each doll. This workshop would definitely work in a range of settings, and especially for different women’s groups. By using any form of play you are engaging with people in a less-threatening way, and people become more creative and take chances.

I saw a lot of dolls getting their heads pulled off, hair chopped off, clothes slashed, bodies painted, blood drawn on, tattoos etched, hair stuck all over them, and placards stating the dolls’ intentions. The activity was great not only for promoting discussion in small groups, and then to the wider class, but for the students themselves to think about what issues struck them from the module, their wider readings and assessment preparation. The workshop was a way of threading ideas and theories together. 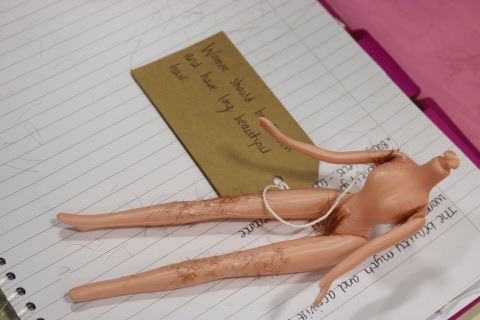 The results were brilliant! I was very impressed with every student and group.

This doll depicts a ‘natural’ woman. 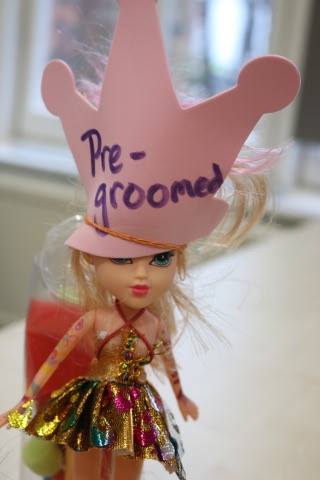 This doll relates to the students’ experiences in Nepal with human trafficking.

The beauty myth that women should be shaved and have long hair on their heads. 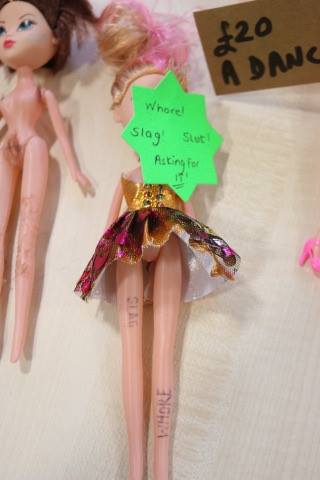 A doll influenced by the students’ friend’s art project. 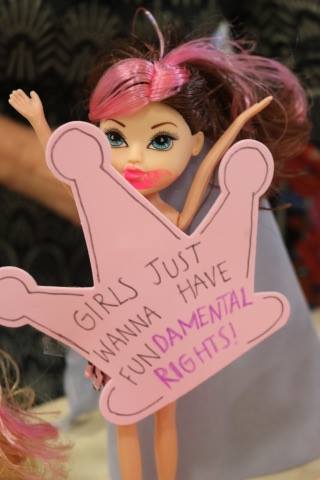 A student preferring not to change the doll bar tying her hair up and removing her heels. Asking why we need to change. 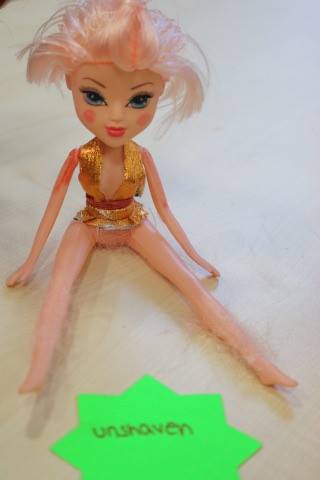 The following 2 photos depict a stripper Barbie, a dichotomy between her physical labour, and her intellectual worth. 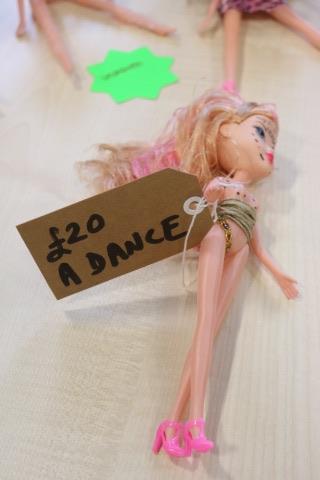 This doll depicts the airbrushing out of nipples on social media. 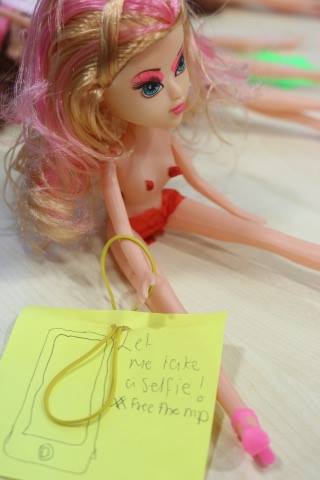 We plan to move the dolls to a different location, to get viewers to leave post it notes with their reactions for International Women’s Day.

I loved doing this Barbie workshop, and welcome any feedback. @princessjack.

← The fear-mongering of the smear Maria with the Red Hair →