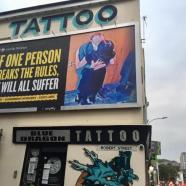 Sex work, disability and the pandemic

Posted by plasticdollheads on July 4, 2021 in covid, Criminology | 1 Comment

I will start by saying that I hope you are well. My thoughts are with all those struggling, grieving and suffering in various ways. Things are unlikely to become much brighter in the recovery period where we will face different challenges. We must care for one another and fight injustices wherever we see them.

The featured image is Copyright to Led By Donkeys.

I will shortly be publishing my co-authored article on the Health/power/criminality-nexus and the pandemic response. I have been researching Covid since March 2020 and will have several outputs in this area.

For anybody that follows me you will know I am a critical criminologist who is interested in power and moralising discourses that construct ‘deviant’ groups as the ‘other. Other publications I have in-press for 2021 also draw from the literature on the widening web of governmentality and how a range of actors regulate and discipline on behalf of the state.

The pandemic has brought many of my interests together in a tangible way. We can see how deserving and undeserving victims are created, we can see how the ‘other’ are constructed as literal vectors of disease.

I blogged in November 2020 about the War on Dissent here.

I blogged in January 2021 about The State We are In

I blogged in June 2021 about The Spirit of Lockdown.

The blog posts above have reading lists and article links.

The war on dissent has concerned me from the start. Flying drones to spy on dog walkers was not a normal action and had no epidemiological basis. Yet many people thought it was ok as the dog walkers had ‘broken the rules’.

Fast forward to now, where people are being reported for being ‘anti lockdown’. This should make you very uncomfortable.

In a global context, governments are chillingly attacking dissenting voices. In Belarus a law student was arrested after her graduation speech.

Arguably in the UK we are now in an autocratic regime. The State of Exception was vulnerable to a viscous power grab where the minute details of our daily lives were criminalized.

People are frightened and confused and the government are persisting with their divide and rule tactics. Whilst we are arguing on twitter over mask exemptions and arrows on floors, the super rich are getting richer and the NHS is at risk of ever more privitization.

Nuance and reason have gone. As a supporter of the decriminalization of sex work I am called ‘pimp lobby’ and told I ‘support the rape of women and girls’. The same happens for speaking about the competing harms and risks of the pandemic strategy. Instead of engaging with the health/power/criminality-nexus and reading the related journals and books, it is far easier for people to screech ‘denier’ (which makes no sense given that my husband and I are both immuno- compromised and have both had Covid).

Much of this is a form of stigma management and people trying to legitimize how you critiquing the state is ‘worse’ than them going to a party in a group. Just as in the early days of lockdown 1 and 2 people were calling the police on their neighbours for having a relative pop in for a cup of coffee or going running too often.

We know that the moral panic surrounding people a ‘vector of disease’ has always fallen on marginalized groups such as sex workers, the AIDS pandemic is testimony to that. At such crisis times, an ‘other’ is a useful political tool to attach blame to.

Sex workers are currently facing a coordinated global attack from all sides. Public attitudes are have been hardened through fear and risk aversion. We know that the legacy of the Contagious Diseases Acts impacts us to this day.

This is deeply troubling for me as a criminologist who has spent the last 20 years in and around sex work.

All those at the margins are facing punitive crack downs. Immigration raids are leaving communities scared and vulnerable. Priti Patel wants to send migrants to off-shore processing hubs. This is much easier done after the government and media have pumped off endless racist bile about ‘foreigners’ infecting us through perforating our borders.

The Police, Crime, Sentencing and Courts Bill (which I have blogged about since last year) is a coordinated attack on our civil liberties.

Kirsty Brimelow QC stated that: The new legislation would crush the principle of policing by consent in the UK and stifle democratic change in the UK”

Traveller communities are also facing horrendous attacks on their rights to their way of life.

To return to the subject of sex work, Diana Johnson MP wants to push for Nordic Model amendments to the above bill.

At the same time that MP Peter Kyle wants to clamp down on ‘rent for sex’.

You can also read about this in the New Law Journal here.

This is a coordinated assault on sex workers taking place during a global pandemic where the opportunity to mobilize is heavily limited.

Disability is also a huge issue of concern.

Whilst many high-profile disability campaigners present disability as a homogeneous experience (it absolutely isn’t!) I speak as a woman with several disabilities and autoimmune Dx who has experienced the hostile architecture against disabled people, elderly people, and parents during the pandemic. The caging of benches meant that many people could no longer safety or comfortably access space. It is surprising how few of the blue tick twitter campaigners are talking about how disabled people are being cleansed from public space through mechanisms that were meant to ‘protect them’. Vulnerability is often used a mechanism of social control.

One of my best friends is 82 years old and Blind, she has faced much hostility in shops for not being able to follow arrows on the floor. When pointing out that she is Blind, she has been told “you shouldn’t come in here then”. This hate for disabled and elderly people has risen during the pandemic.

This abuse is hate crime and it was already on the rise before the pandemic intensified it. For the many disabled people who cannot wear masks and are exempt from doing so, the abuse escalates. Some are interrogated, others are screamed at.

My twitter friend Helen who is Deaf/Blind experienced a hate crime incident from a bus driver.

Disabled people have been neglected during Covid as the report by Scope shows.

“There were young people with autism who had attempted suicide because they could no longer cope with drastic changes, others were isolated and alone, their support networks gone or hours of care cut”.

Mental health campaigners have fought for decades for recognition of our disabilities and needs. Yet these have been dismissed by so many people who have callously suggested that mental health sufferers will just have to “get on with it” and at least we are not “dead from Covid”. Support networks, groups, key workers, social prescription activities, in-person appointments were gone in an instant. To add insult to injury we were called ‘selfish’ for having these needs to stay well.

We need to stop the infighting and start building more alliances. The recovery period will be hard and we need radical kindness and an acceptance of competing needs.

As always I am keen to connect and work with those in similar and cognate areas.

← The Spirit of Lockdown Long read: The War on Dissent during the State of Exception →